The Art of Failing, Inspired by Mindful Parenting

Presented by Tomasz Smaczny at IT Matters Conference ONLINE

These transcripts were generated by a machine and checked-over by a human for accuracy. Still, there may be small errors. If you spot any, please feel free to submit a pull request with amendments.

Hello, I'm Thomasz Smaczny. I have been in the business for the last 20 years in different positions and different sectors, but mainly in sales and marketing. But what I'm doing now I'm a parenting educator and a leadership coach. For start, I would like to invite you for a walk with a child, this might be a child of your own, or this might be a child, you know very well. So imagine you are preparing for this walk, and the kid is putting his shoes on. But he's very, very struggling in. He's struggling with lacing his shoes, and he's getting frustrated. And all of a sudden, he's actually taking off the shoes and throwing them against the door. What do you do? And then eventually, you're leaving the house and you are in the playground. And the kid is climbing a structure and he's getting to the point that he's hesitating to go farther. He's pretty, pretty high already. But he's frustrated, he's a bit hesitating. And he calls for your attention. He calls help. What do you do? And then you, you continue your journey through the park, and you just walking around along one of the paths. And he's running freely, exploring the environments, but he's, he's really energetic, and he runs here and there. And all of a sudden, he stumbles and falls down. And there is this terrible silence for a moment. And then you start hearing him crying? What do you do? I'm not going to test your parenting knowledge. But with this simple exercise and maybe reflection of what would you do in this situation.

So I would like to just convey the message that we pretty much know what to do. And, you know, developmental psychology and child psychology give us a lot of hints of how to behave in such moments so that we really help our kids go through these experiences. And, and I believe we can learn from this knowledge actually, also in business, and for a long time I thought I was the only one although I see that these two worlds are not that that separate, that, you know, [one can think] one can think actually these two worlds are about human relations and human communication. So I googled once, whether there were other people thinking the same way and I just found ,came across, Simon Sinek, who you might know very well, and he was said, the closest thing to leadership is parenting. And I believe we can really get in lots of inspiration from parenting into leadership. So today, we will look at the failure. So how to deal with failure in business, taking inspiration from what we can learn from my mindful parenting. I really like] I would like to refer to Geeta's talk because I really liked what what she said at the, at the end about being very subtle, with offering help. So whatever you hear here today from me, it's not like you know, it's not like a solid 100% advice that you should follow it just an inspiration, and whatever, you know, however it lands with you, that would be good, whatever you can, you can take take from it.

Now, lastly, there's a good question. When we raise our children, whether we plan for this moment, whether we plan, you know, if you go out for a walk, whether we plan for this walk, or whether we plan for a lifetime, yeah, because we plan for the for the walk, then we may really be very impatient with the time that kids take to put the clothes on. So that we ,you know, so we go faster, okay, so I would you will help you, I'll put you on a jacket, we have to leave, we are in a hurry. Maybe we're hurrying , maybe we're not. So that would be a plan just for this situation. But if we think long term that we would like to our kids to learn and innovate and solve problems by themselves, we would give them time, lots of time. And we would give them our patience, because we always know that we will do things faster and better than them. And that requires our patience, not to interfere with too much. And I believe it's the same as the business. If you plan, you know, for short term is the result, you're very biassed. And you're very, you tend to do things for the people. And maybe you have the plan and they just have to execute. But if you plan for a longer period of time, and you would like to build the team that would in the future might be create things that you can innovate not imagine now, then it needs time. It needs your patience. And and I believe coming back to the beginning, if you enjoy what you are doing, then you will have this time, you will have this patience, and you will thrive in the business you are doing just like kids in the playground. Thank you very much. I know my q&a is not possible right now probably because I just running out of time. But I will be in 'Gather Town' right after this talk. And please also join me in on LinkedIn or on social media. If you'd like to connect and speak then I would be happy to. Yeah, to meet you. Thank you very much.

Hey, thank you so much. That was really, really nice. Thank you. And I really liked what you said about acknowledging the pain as well. And not just the end results. That was really nice. Yes. And when the leader sort of shows pain, that they're able to express their pain and not suppress it and say, oh, everything's fine. Don't worry, that is fine. You know, and when we're able to do that, then the children are able to follow that example. Exactly. Pleasant. Yeah. Thank you so much. No worries if you have any questions, but too much please join him in 'gather town'. Oh, there's actually a question for you. Do you have some favourite books about parenting?

Oh, that's a that's a good question. Because actually, I'm writing one now. So I would say the perfect book is not is not available yet. But But you know, it's interesting. Just maybe ill anwser in a in an in a different way. Because it was also interesting Simon Sinek got the question from the audience once. And it was a talk about leadership and he got a question. "Okay, what's your favourite book on leadership?" And he said, The one book I would advise you would be, (I can maybe you know, the title in English would be a bit different) but but it's a worldwide bestseller. So he would recommend a parenting book, which is called, 'How to speak so that our kids listen' something like this. This is a whole series of books. And he will recommend this book as a leadership book. But I think it's also a very good parenting book, as well. But I can give you some other titles, especially, you know, the the direction I like, I like going Can I took Also in, you know, I use in this speech, there's some books available in English that I could recommend, but I guess it would be good. You know, I can do it like after this talk. Yeah.

That would be great. Thank you. Thank you so much. Awesome. And Natalia says, I know that one, and I feel it in your presentation. That's really nice. Ilana says, I think I might be ready to be a parent. Well, that's good news. Very inspiring for you. It's great.

Okay, so now and thank you so much. And now we're going to go over to 'gather town'. Sure, we can all gather with the other people in Track Two as well as the other speakers. So I'm going to put the link here in the chat. Okay. And you should have a password to access that. Let me just copy the password in case you don't have it so you don't look for it every day.

And I hope just to finish the meeting, I hope I know Crystal, it was very stressful for you as well. But you handle it very well. And I just appreciate your effort waiting for me.

Bye bye. Thank you, everyone.

Simon Sinek claims that the closest thing to leadership is parenting. I absolutely agree. Parenting is solidly researched and may be a valuable inspiration for professional growth. In this talk I will explain how you can overcome a business failure by applying mindful parenting principles.

it matters online 2020 working with others
About Tomasz Smaczny

Tomasz helps organizations operating better, healthier and with more fun by taking care of employees’ core needs within Healthy Organisation Project. He believes that parenting is an art worth continuous learning. Mindful parenting makes people more relaxed and competent both at home and at work. For leaders parenting may be the most effective and free form of training. If they accurately use it. Tomasz personally hosts unique parenting webinars and workshops at organizations and designs leadership development programs inspired by mindful parenting.

Tomasz has had 20 years of business experience. He has spent most of his career in marketing and sales in global corporations. As a leader he has led international teams across cultures and continents. He is an accredited ICF coach. In 2017 he spent almost entire year on a parental leave. Since then he has been blogging on RIE parenting philosophy at TastyWayOfLife.com, as the first person in Poland. He co-created the most dynamically growing fathers’ group in Poland on Facebook – Lepszy Tata. In 2019 he set up Healthy Organisation Project, which brought together best of class wellbeing and team coaches who advocate humanistic view on the business.

He has climbed all 7 Summits except for one. He has travelled to all continents, Antarctica included. He has completed a marathon and Ironman 70.3. He has an MBA in Communications, MA in Intercultural Relations, and a postgraduate diploma in Sociology. His daughter’s name is Tosia. 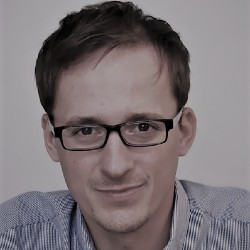 You Got This is a network of community conferences focused on core, non-technical skills coordinated by Kevin Lewis.